The 8 Best Lunch Spots in Alabama! 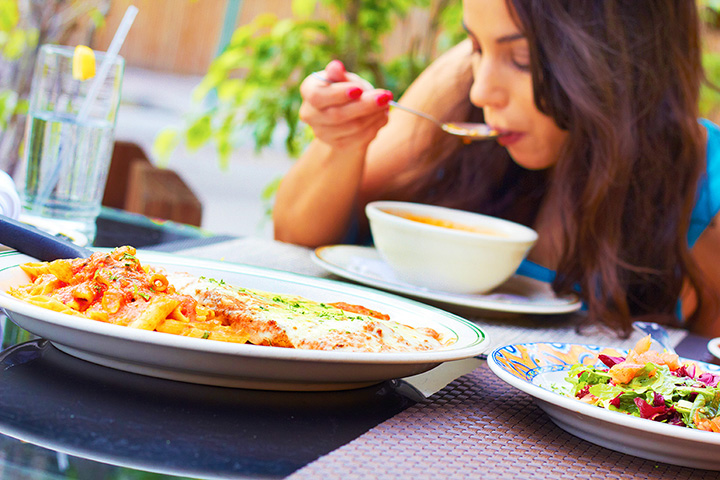 When it comes to lunch spots, Alabamians have an embarrassment of riches. Whether you prefer eating in an exotic location, (how’s under a cave?), a repurposed site (post office pizza, anyone?), or a James Beard Award winning landmark, Alabama is pleased to oblige. Read on to discover 8 of the best lunch spots in the entire state, and feel your taste buds water!

The Blue Plate Cafe has two locations in Huntsville, Alabama, and offers hearty, down-home southern cooking. From their website: “We take pride in preparing Classic Southern Dishes with our Mother’s and Grandmother’s recipes which have been tested and perfected over the years.” The lunch and dinner menus change every day of the week, but always offer the Blue Plate special, vegetable plate, and specialty plates, like fried chicken and southern fried catfish. Make sure to get a slice of fresh baked pie for dessert.

When in the mood for seafood, you won’t do better than either of the Original Oyster House locations. Since 1983, Original Oyster House has served the Gulf Coast. Overlooking the water, the view is resplendent and the food delicious. The menus may differ slightly between locations, but we recommend the homemade seafood gumbo and—what else?—the oysters.

Martin’s Restaurant is the Montgomery Advertiser Readers’ Choice award winner for “Best Fried Chicken” and “Best Home-style Cooking” for 2012. Martin’s has been a family owned and operated restaurant since the 1930s, and is one of the oldest full-service restaurants in Montgomery. The menu changes daily, and is inspired by the family cooking the owners grew up with. Specialties include their fried chicken, baked meatloaf, chopped steak, baked pork chops, cornbread, and more.

The Amsterdam Cafe in Auburn, Alabama, offers lunch, dinner, and Sunday brunch. The lunch menu provides Alabamians with unique, fresh dishes, including roasted salmon, fish tacos, Gulf shrimp and grits, and the fried chicken doughnut. The menu is subject to limited availability, as all items are made with locally sourced, fresh and seasonal ingredients. If you love the food, stop by the store on your way out for a t-shirt.

The Rattlesnake Saloon in Tuscumbia, Alabama, sits on land that has been in the Foster family since 1916. In 2009, construction on the saloon was complete. The Rattlesnake Saloon is “the watering hole under the rock.” In other words, the Rattlesnake is located inside a cave near Tuscumbia. It has quickly gained a reputation for its unbelievable locale and mouth-watering, southern-inspired fare. Stop by to eat in the cave, listen to live music, and chow.

Featured as a “Must-Try Lunch and Dinner Spot” by Dream Vacation Magazine, Post Office Pies slices up pizza pies in a converted former post office. Build your own or go for one of their specials. Not in the mood for a pie? Try a sandwich or salad. Standard pizzas include Margherita, pepperoni, sausage, the swine, the white, chicken pesto, and the Italian.

Brick and Tin is reinventing the sandwich, one bite at a time. With two locations in Birmingham, Alabama, it’s easier than ever to stop by to try out one of their unique creations. The breads are baked in house and cheeses are locally sourced. Sandwiches are served with a choice of soup or salad and include the tomato panini (Alabama grown heirloom tomatoes, pecan pesto and aioli on pain de mie loaf), the Members Only (smoked turkey, cucumber, avocado aioli, havarti, pepper relish and bacon on French wheat loaf), and the Golden Flake (house-made ham, pimento cheese, potato chips, pickled green tomatoes on soft white bread), among many others.

The James Beard Award Winner Bright Star Restaurant opened originally in 1907, and has built a name for itself for consistent, unforgettable food. Oscar winner Sandra Bullock even brought her father to this Alabama landmark for his birthday dinner. The food is Greek-inspired, with signature dishes like seafood gumbo. The accolades and recognition showered upon it are far-ranging, including notes from CNN and MSN. Come in for lunch or dinner and make sure to try the gumbo, shrimp cocktail, and the Greek tenderloin.